Where To Celebrate Loy Krathong And Yee Peng, Thailand’s Most Beautiful Festivals 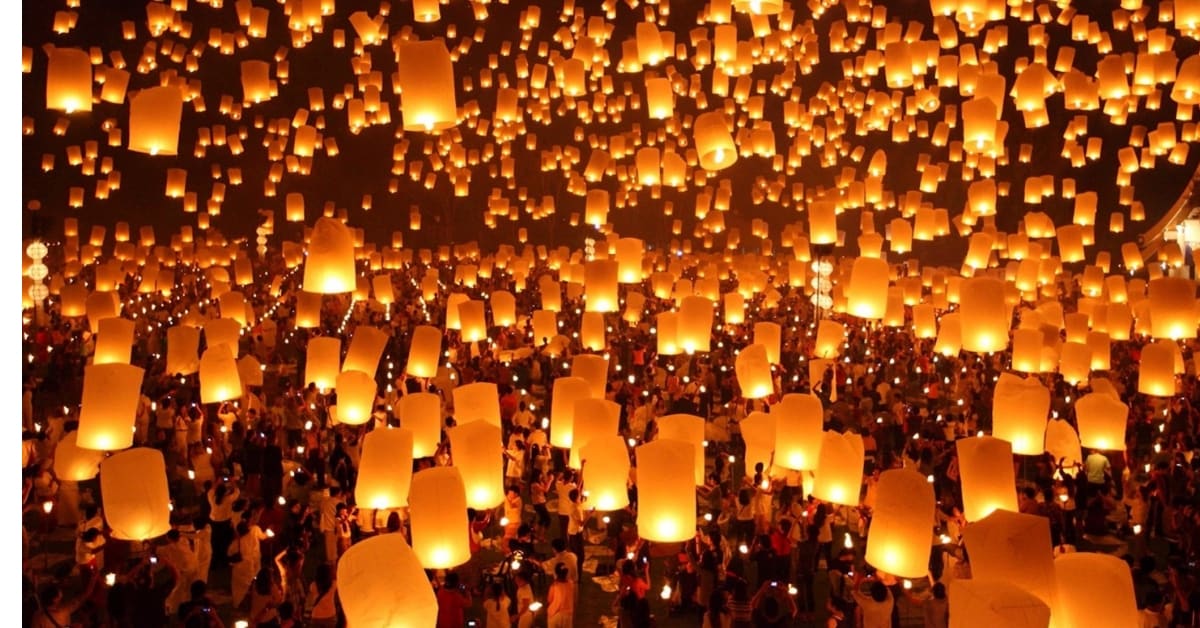 Festivals with a sight to remember

Come November time in Thailand, you will be treated with a picturesque and romantic view of waterways and skies across the country all lit up with floating krathongs and lanterns. We all have the Loy Krathong and Yee Peng festivals to thank for that!

While they are two different festivals, they’re usually celebrated at the same time. For the most part, Yee Peng is only celebrated in North Thailand while Loy Krathong is celebrated throughout the country. For Loy Krathong, decorated mini rafts are set afloat on the water while for Yee Peng, paper lanterns are released into the sky.

About Loy Krathong and Yee Peng 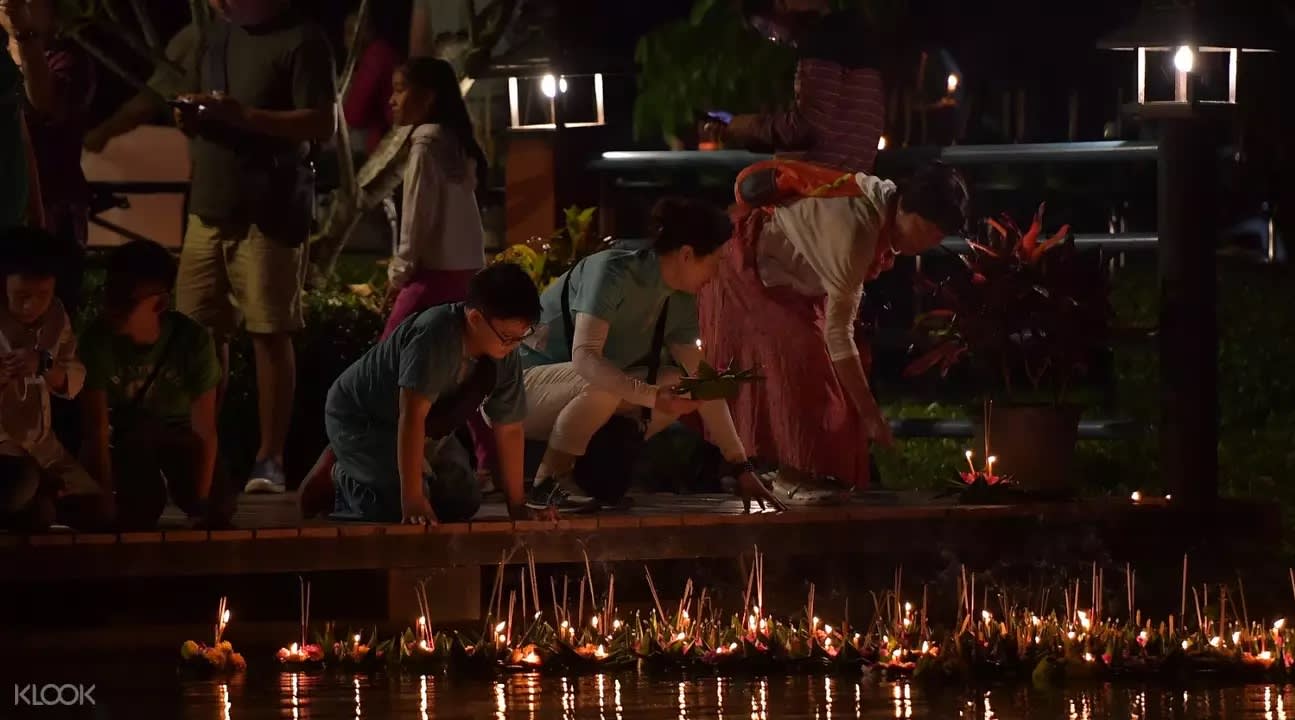 Also known as Thailand’s light festival, Loy Krathong (or Loi Krathong) is a three-day festival that takes place on the evening of the full moon in the 12th month of the traditional Thai lunar calendar. In Chiang Mai, it’s also celebrated concurrently with Yi Peng or Yee Peng Festival.

During Loy Krathong, locals will gather around lakes, rivers and canals to release beautiful lotus-shaped rafts that are decorated with candles, incense and flowers. The word krathong refers to the decorated raft while the word loy means to float.

While there are different tales about the origins of Loy Krathong, many celebrate this ritual now to pay their respects to the Goddess of Water and to ask for forgiveness for causing pollution.

Krathongs were traditionally made with organic materials like banana leaves, banana tree bark, spider lily plants and bread but you can find different variations now using styrofoam, glossy paper, and plastic. Avoid adding on to the pollution by getting the ones made using natural materials! 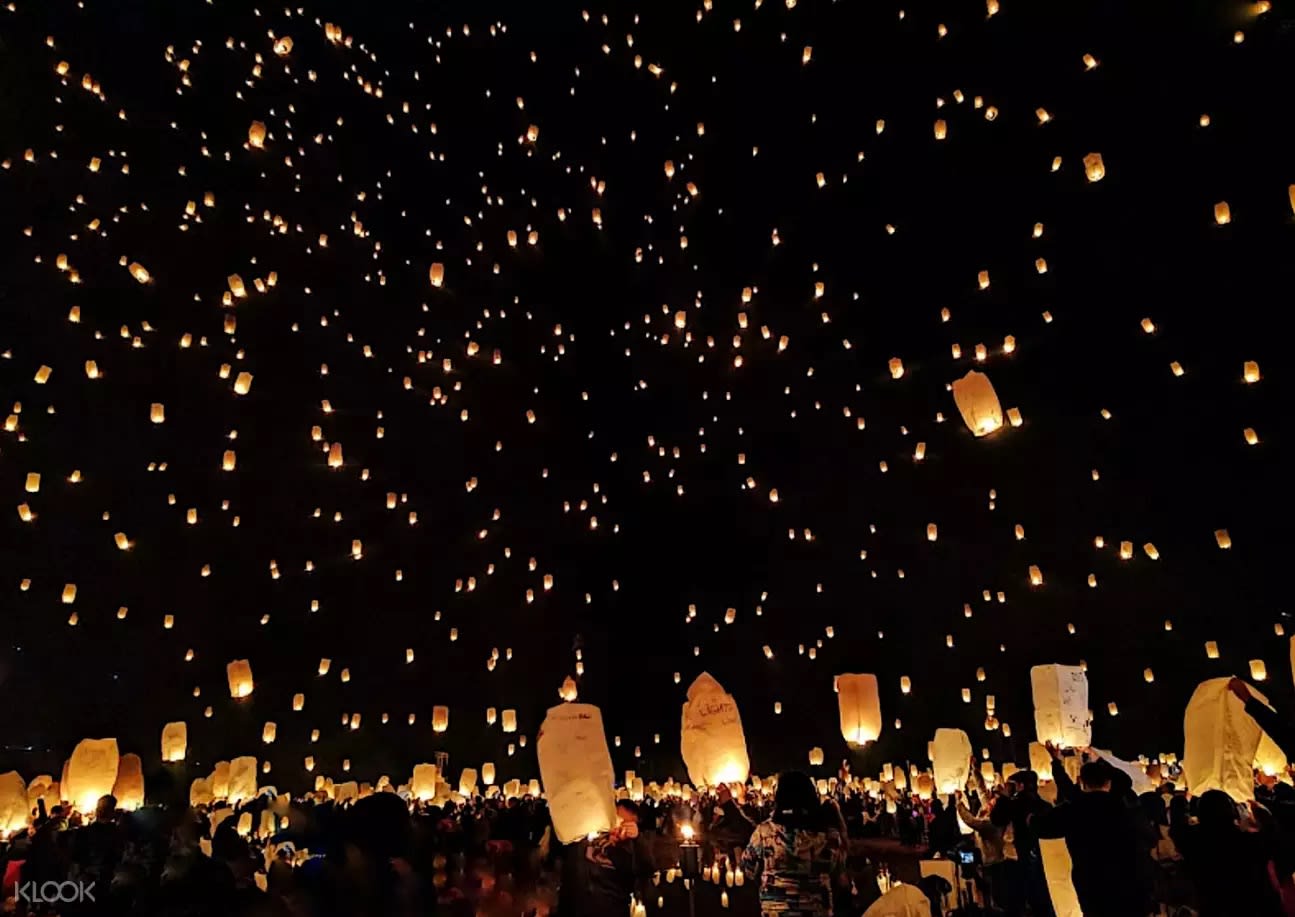 In North Thailand, the Loy Krathong festival coincides with Yee Peng or Yi Peng festival and they’re often celebrated together. During Yee Peng, locals will release paper lanterns into the sky to welcome a brighter future. Many will recognise it as the Tangled-like lantern festival!

The sky lanterns, also known as khom loi, are made using thin rice paper, bamboo and fuel cells. Many make a wish before releasing their lanterns and it’s been said that if it stays lit until it’s out of sight, your wishes will come true!

Where to celebrate Loy Krathong and Yee Peng 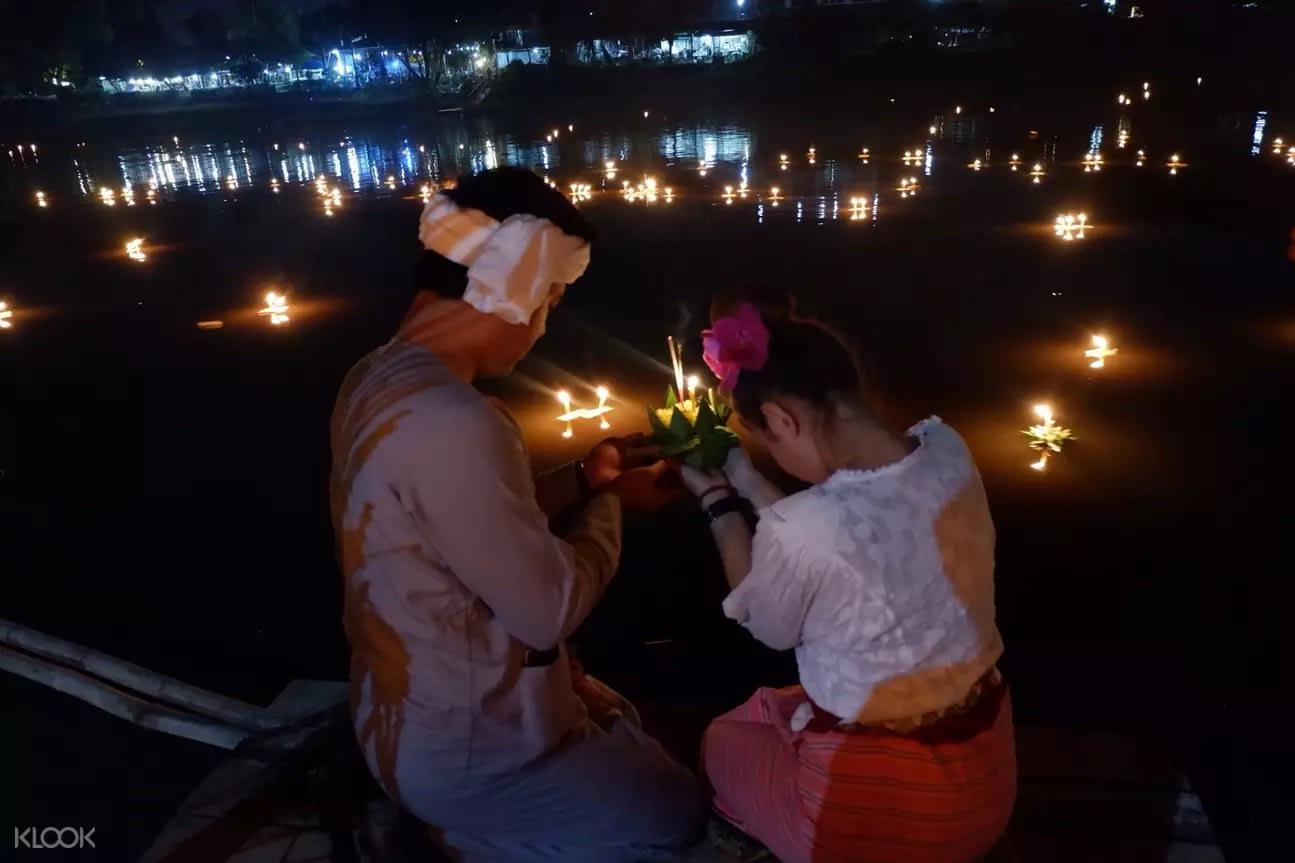 While you can find Loy Krathong celebrated throughout all of Thailand wherever there’s water, there are a few cities which do it on a larger scale namely Chiang Mai, Bangkok, and Sukhothai. Yee Peng, on the other hand, is celebrated in North Thailand primarily in Chiang Mai.

If you can’t decide where in Thailand to celebrate this festival, here are the highlights of the 3 recommended places to celebrate Loy Krathong or Yi Peng. 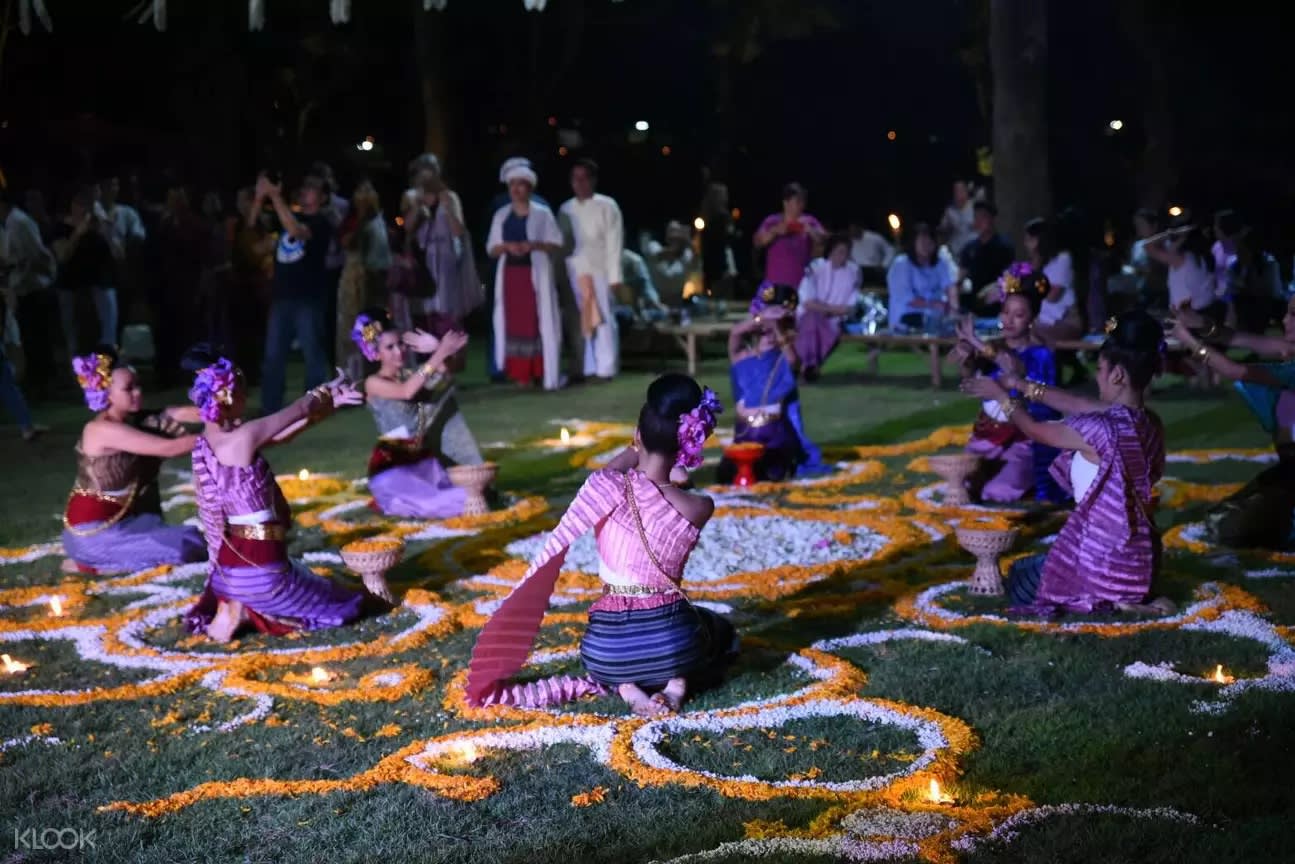 Easily a top choice amongst travellers, the celebration in Chiang Mai is extra special because Loy Krathong and Yi Peng are typically celebrated concurrently. Aside from the floating rafts and candles in the river, you can find the night sky being decorated with countless brightly lit paper lanterns.

Over the few days of the celebration, you can find several festivities and activities like parades, fireworks display, traditional performances and more. Celebrated in many places throughout Chiang Mai, some locations require entrance fee while some are open to the public. 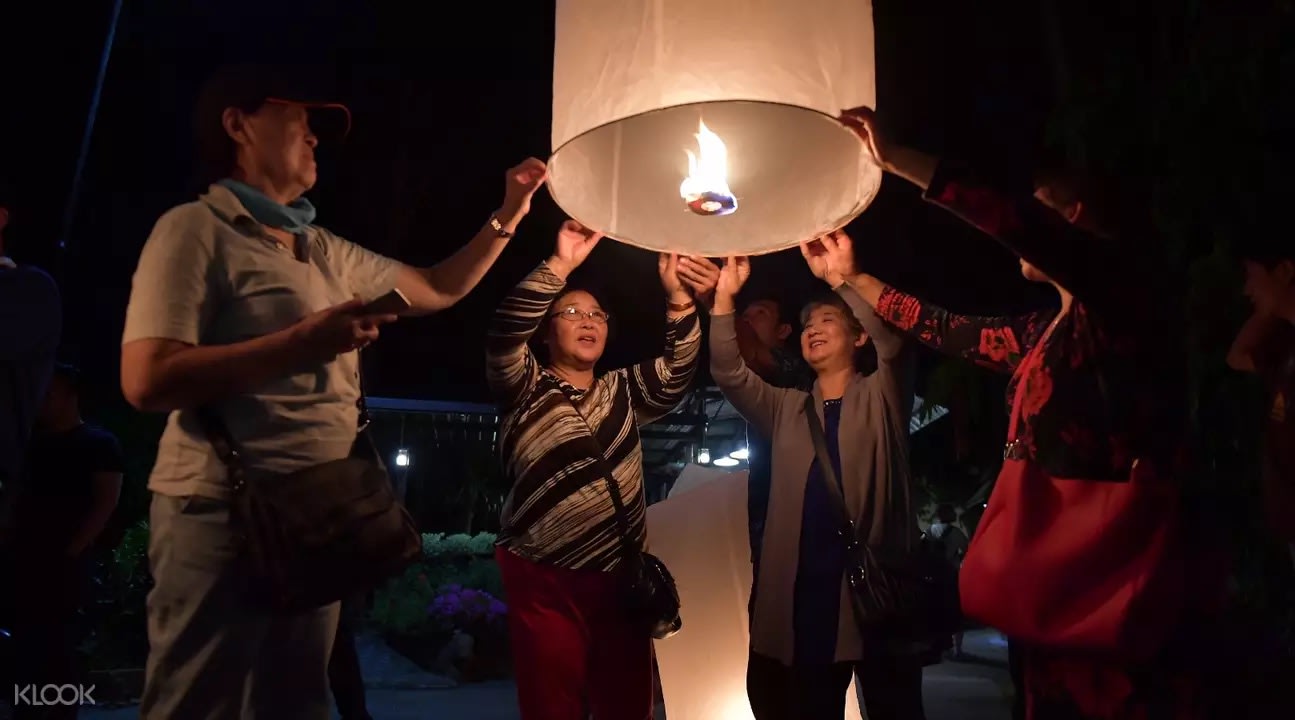 Save the hassle of looking for transport during the busy festival and battling with the crowd to purchase food, krathong and lanterns by joining a tour. Book a Loy Krathong and Yee Peng tour from Klook with roundtrip transfer, dinner, and other items included for the most convenient experience of the festival!

One of the?top locations include the famous Maejo University. Besides that, you can also celebrate them at the Horizon Village & Resort, Pingnakorn Riverside Hotel, Cowboy Army Riding Club and more. 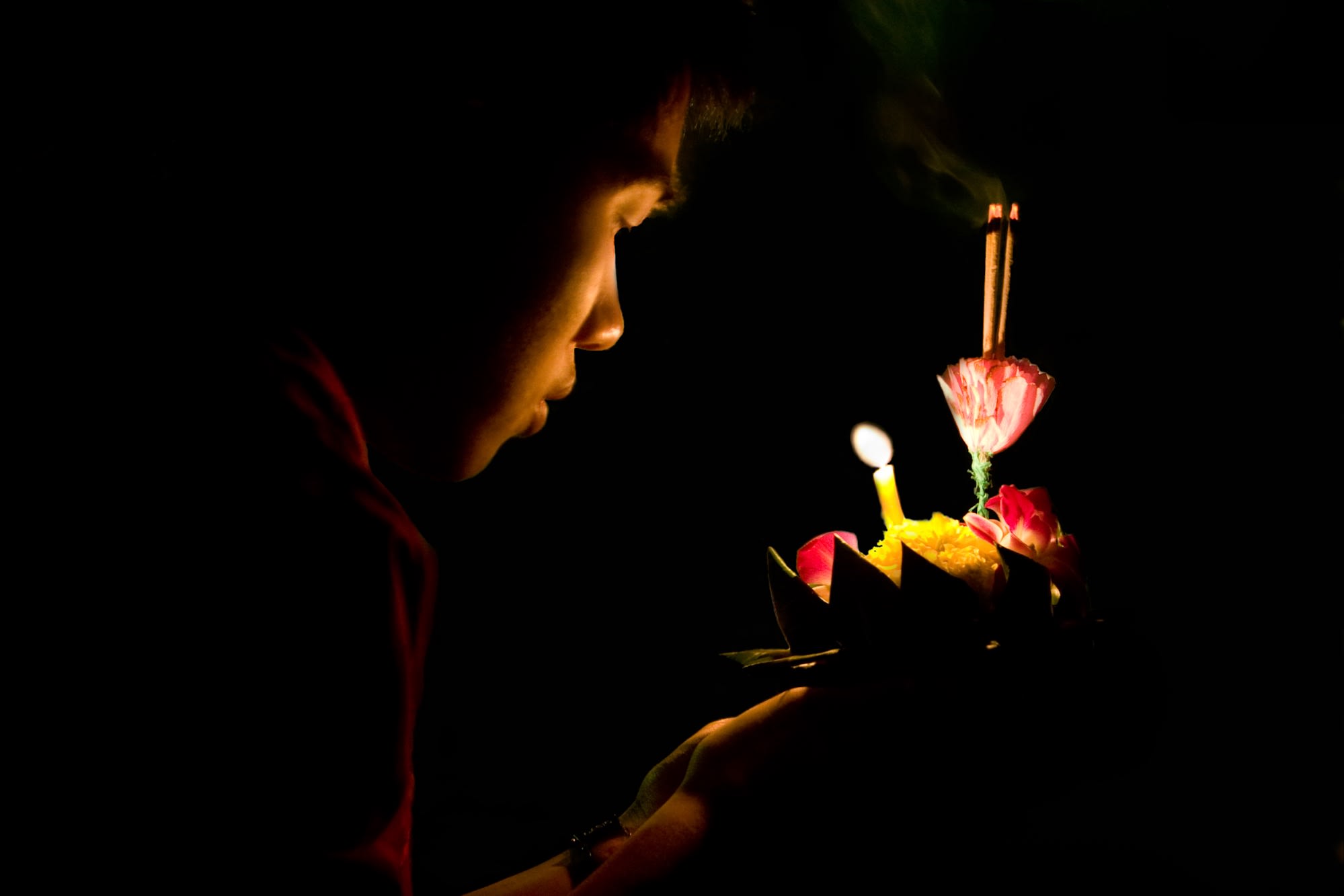 In the vibrant capital of Thailand, Loy Krathong is a celebration not to be missed. You can find locals gathering at the Asiatique riverside market setting their decorated floats to sail and partaking in various festivities like making their own krathong! You can also find floating processions and firework displays during the festival. 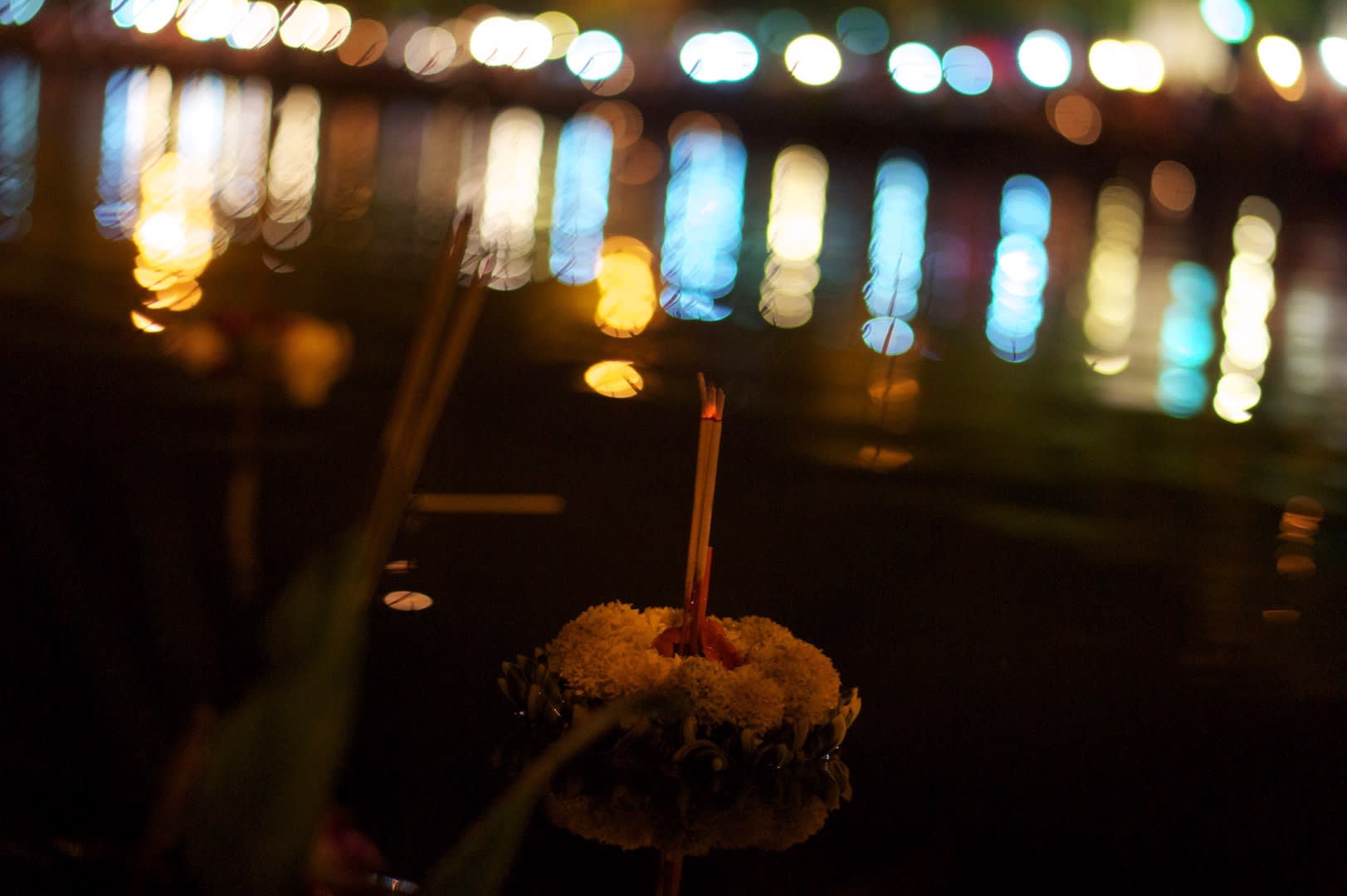 Said to be the place of origin of Loy Krathong, festivities in Sukhothai go on for five days instead of the usual three days elsewhere in Thailand. Here, the festival is more than just floating lights, it’s a full-on celebration!

Locals and visitors alike will be thoroughly entertained with plenty of activities like beauty contests, parades, folk music performances, light shows and more. Simply head over to the Sukhothai Historical Park (old city) to immerse in a five-day cultural exploration.

When is Loy Krathong and Yee Peng 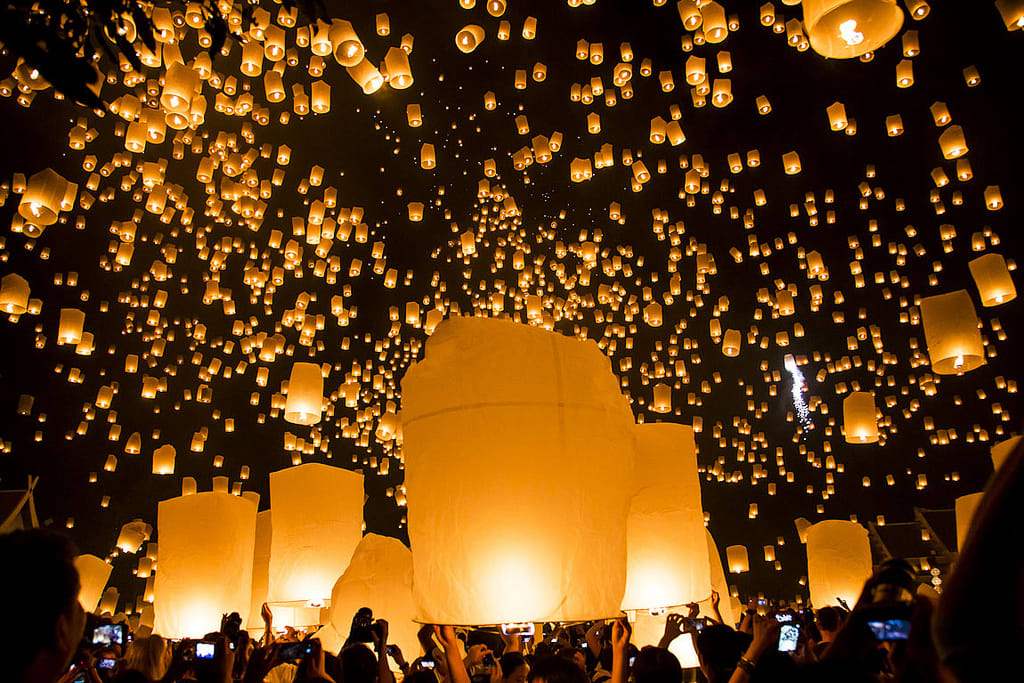 Typically celebrated in November, the festival takes place on the evening of the full moon of the 12th month in the traditional Thai lunar calendar. While it falls on a different date each year, here’s a forecast of when you can expect to celebrate this festival for the next few years:

Make sure to mark those dates down!

Now that you’ve got your agenda all settled, make sure to complete your trip with essentials like a SIM Card and WiFi Device, airport and city transfers and more! With plenty more to see and do, make sure you check out all the fun Thailand activities and adventures on Klook.

8 Things to Avoid in Thailand (and What to Do Instead)
Thousands of tourists visit every year, but there are some pitfalls that could ruin your Thailand vacation. Here's what to avoid...and what to do instead.

The Ultimate Cartoon Network Amazone Water Park Pattaya Guide
Here's everything you need to know about the world's first Cartoon Network-themed waterpark, that is housed right in the heart of Pattaya!

Klook Travel Curator Series: Take a KLOOK at Bangkok!
Oh wow, Bangkok! DAY 1: KLOOKING AROUND We bid Manila ‘laa gòn’ and found ourselves in Khao Yai, where we picked up our pocket wifi …

Bali Treats For The Soul
Discover the tranquil island of Bali, through the top picks of inBali.org Editor Samantha Chalker. 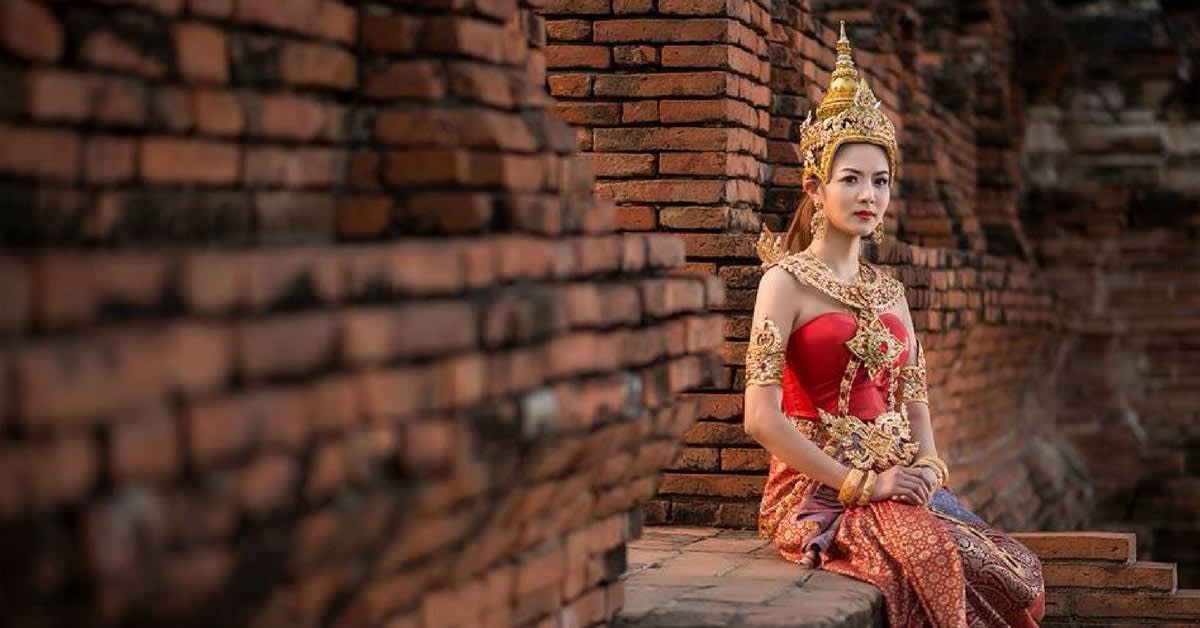 Movie Tickets And More When You Dress Up This Songkran!
Don on your best Thai traditional outfit this Songkranbecause if you haven't heard, these majestic pieces of clothing are making a comeback! Plus, did we mention that you'll even get to enjoy special perks like one for one movies? Find out more! 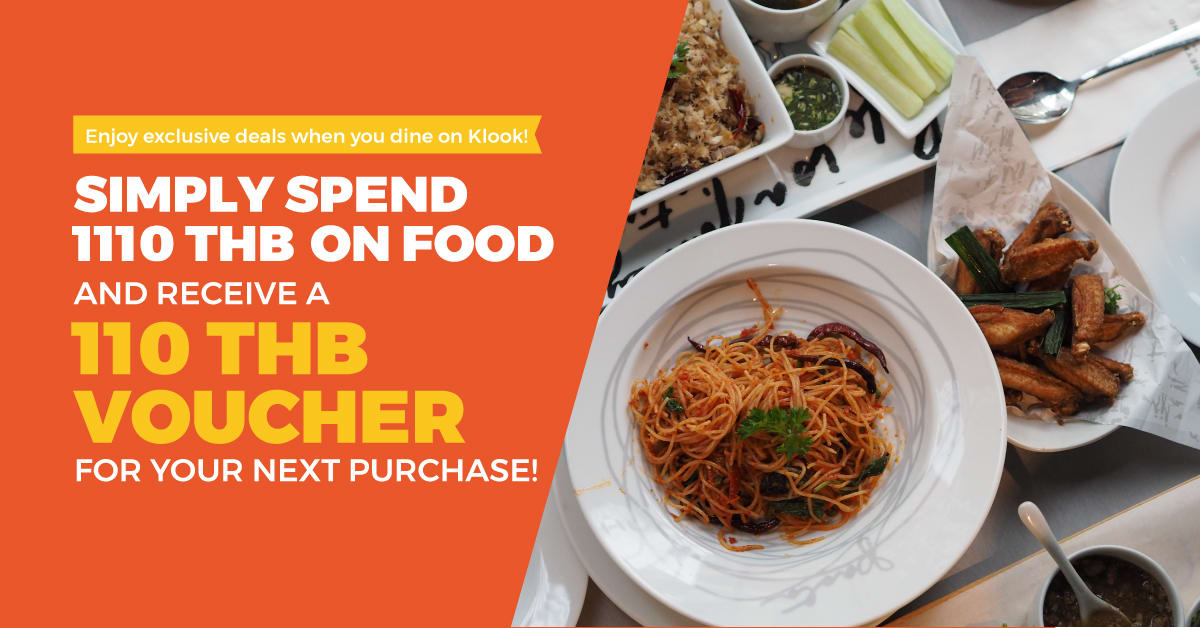 Feast On THB1110 Of Food At Siam And Get THB110 Free!
Siam must try foods! Siam isn’t just home to shopping malls like Siam Paragon and Siam Center with a huge array of apparel brands for …
Summary
Ask Klook
About Us
Careers
TERMS OF USE
Help
? 2014-2020 Klook Travel Technology Limited. All Rights Reserved.
HK Travel Agent Licence: 354005.
SG Travel Agent Licence: 02851.
TW Travel Agent License: 甲 03950.
Travel discounts up to 60% off sent straight to your inbox
By clicking Subscribe, you have agreed to our Terms & Conditions and Privacy Policy
Subscribe